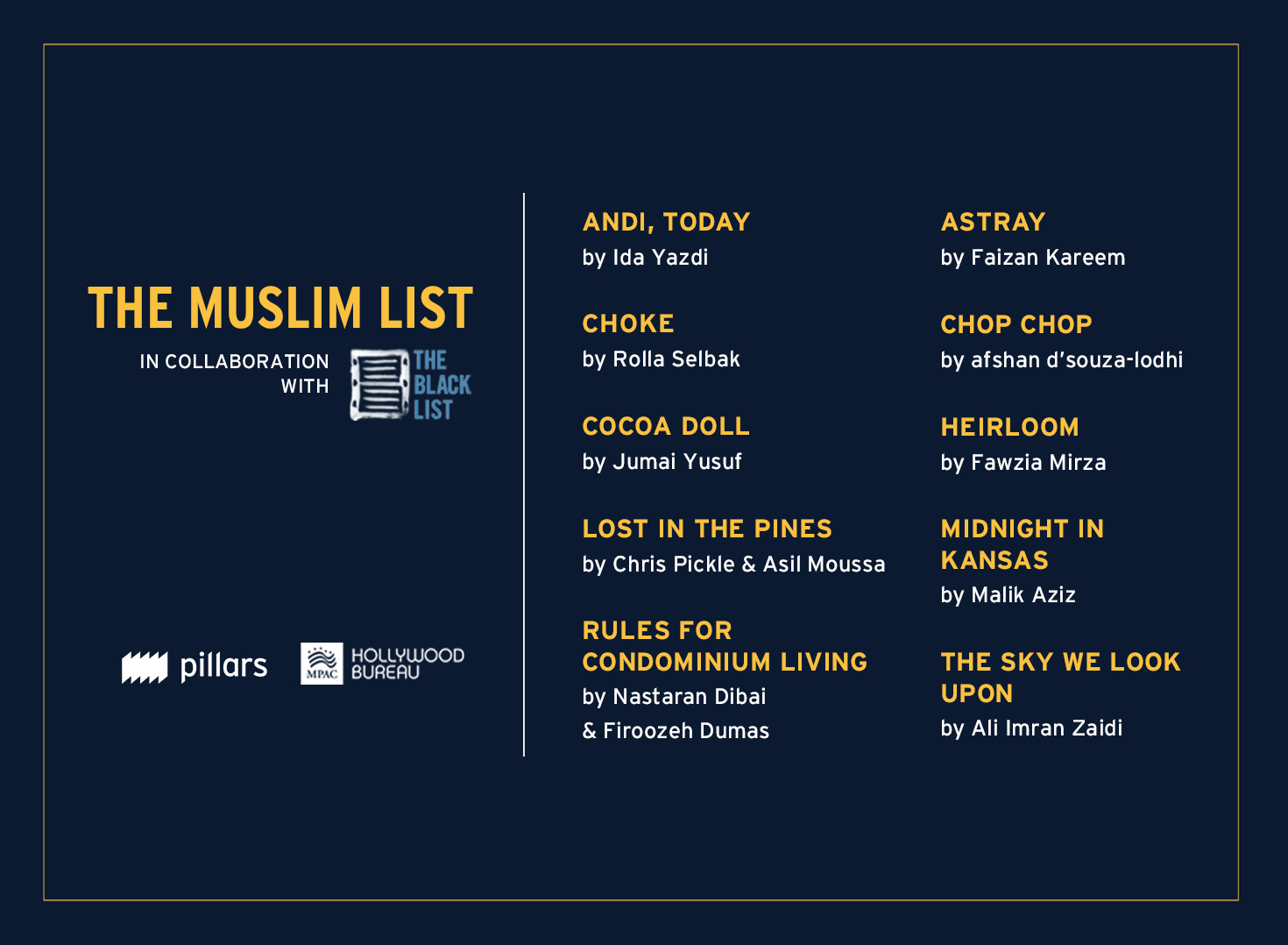 We are so pleased to announce the writers and projects selected for the 2022 Muslim List! In alphabetical order, they are:

ANDI, TODAY by Ida Yazdi
Andi Jamali, a 15-year-old Iranian American living in New Jersey, is suddenly reunited with her mother after ten years on a popular daytime talk show. After being apart for most of their lives, Andi and her mother, Maryam, must find a way to reconnect and make up for lost time.

ASTRAY by Faizan Kareem
A widowed Muslim doctor, also an aspiring Imam, grapples with his faith upon discovering his child’s transgender identity.

CHOKE by Rolla Selbak
Sara Beda is a martial artist whose dreams were destroyed, along with her family home, in the war in Syria. The story follows her and her family’s journey as Muslim refugees in the suburbs of America and her rise against adversity on her quest to become an MMA champion of the world.

CHOP CHOP by afshan d’souza-lodhi
CHOP CHOP is a dramedy that gives us an insight into the goings-on of an all-female halal butchers just outside the city. With Eid just around the corner and butcher shops nearby being closed down, the women won’t let anything, or anyone, get in the way.

HEIRLOOM by Fawzia Mirza
Zareen, a queer, South Asian, Muslim woman, just got engaged to the love of her life. But when her mother refuses to let her wear the family heirloom jewelry at the wedding, she, her best friends, and fiancée turn their joint bachelorette party into a good ol’ fashioned heist.

LOST IN THE PINES by Chris Pickle & Asil Moussa
When a headstrong 14-year-old Muslim American girl Layla and her father, Will, crash their canoe on an epic backcountry camping trip, they are forced to hike 100 miles across the perilous forest to get help. Now in the unforgiving wilderness, they battle wolves, struggle against the elements, and join forces with a stray dog, all while finally coming to grips with their relationship after the death of Layla’s mother years earlier.

MIDNIGHT IN KANSAS by Malik Aziz
An established Black Muslim Hollywood attorney flies home to Kansas to defend his sister against her alleged attack on a white man.

RULES FOR CONDOMINIUM LIVING by Nastaran Dibai & Firoozeh Dumas
Set in Newport Beach in the late ’70s, this comedic coming-of-age story is told from the perspective of an Iranian teenager whose California dreams and family’s life are upended when Iran and America become official enemies due to the hostage crisis.

THE SKY WE LOOK UPON by Ali Imran Zaidi
On an overnight train through the rural Pacific Northwest, a newlywed couple returning home to feuding families is trapped in a bloody high-wire conflict — where they must choose a side to survive.

Additionally, we are pleased to share the following updates for alumni of the very first Muslim List:

Participating organizations are thrilled to be collaborating on the Muslim List for a second year, and had the following to say about the partnership:

“Congratulations to the winners of our annual Muslim List. It’s so wonderful to be back for a second year. Each of the ten writers and their projects fills me with great hope for the future. We’re honored to be partnering again with the Black List and the Pillars Fund. Thank you to Franklin Leonard, Kate Hagen, the Black List team, Arij Mikati and the team at the Pillars Fund for their collaboration.” – Sue Obeidi, Director, MPAC Hollywood Bureau

“Congratulations to our 2022 winners! Once again, The Muslim List shows our communities are brimming with an abundance of creative talent and provides Hollywood with a remarkable opportunity to invest directly in this next generation of Muslim creatives.” – Arij Mikati, Managing Director of Culture Change, Pillars Fund

“I said last year that it was an honor to partner with both MPAC and Pillars Fund and it’s doubly so this year. These scripts and writers are incredibly exciting, and I look forward to seeing these and other stories on all manner of screens in the not too distant future.” – Franklin Leonard, CEO, The Black List

ABOUT MPAC
The MPAC Hollywood Bureau changes the narrative of Muslims in the entertainment industry so that audiences see Muslims as vital contributors to creating social and cultural change in America and around the world. They do this by engaging decision makers and creatives to improve the quality of authentic, nuanced, and inclusive depictions of Muslims and by creating opportunities for Muslim storytellers to tell their own stories.

ABOUT PILLARS FUND
Pillars Fund amplifies the leadership, narratives, and talents of Muslims in the United States to advance opportunity and justice for all. Since our founding in 2010, Pillars has distributed more than $7 million in grants to Muslim organizations and leaders who advance social good. We invest in community-focused initiatives, push back against harmful narratives, uplift Muslim storytellers, and organize Muslim donors to give together strategically.

ABOUT THE BLACK LIST
The Black List, an annual survey of Hollywood executives’ favorite unproduced screenplays, was founded in 2005. Since then, at least 440 Black List scripts have been produced, grossing over $30 billion in box office worldwide. Black List movies have won 54 Academy Awards from 267 nominations, including four of the last twelve Best Picture Oscars and eleven of the last 28 Best Screenplay Oscars. More information on the Black List is available at www.blcklst.com.

Everyone deserves to feel safe in their homes, schools, places of worship, and beyond. Last night, a Muslim man was charged with killing two Muslim men in Albuquerque, New Mexico, and he is suspected in the killing of two others. The New York Times also reports that the shooter may have been acting based on […]

We are still accepting applications for our Catalyze Fund Program Associate position ⚡️ Apply to join our team!… (link)