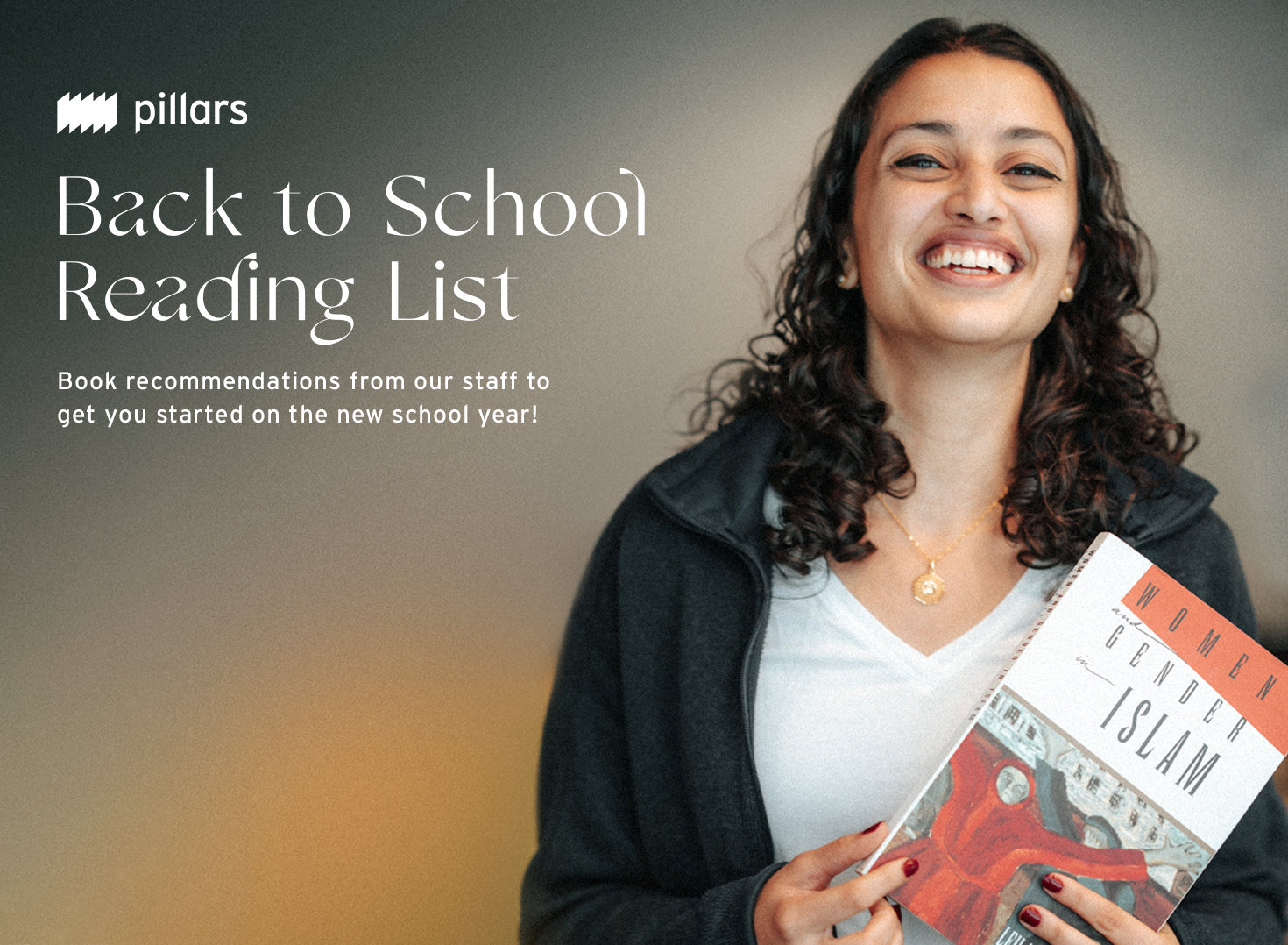 Back-to-School Reading List, Brought to You by Pillars Staff

One of the best ways to widen your perspective on social justice and community issues is through reading, listening, or watching new content. It could be a fantasy novel filled with metaphors or a documentary film about an extraordinary historical figure—new media introduces you to concepts and ideas you might never have considered before.

Whether you’re returning to school or looking for the next best thing to read, Pillars staff has your back! We’ve asked our staff to recommend one piece of media that informs their work at Pillars. This back-to-school reading list has topics that range from what it means to be Muslim in the United States to why it is essential to start prioritizing mental wellness. Take a look below:

“One of my favorite quotes is from my dear friend and Pillars Muslim Narrative Change Fellow Hussein Rashid, who says there has never been an America without Muslims. This book captures some of that rich history of Muslims in America with such clarity and rich detail. We just recently passed the 75th anniversary of the partition of India, and one of the things that often gets overlooked in that history is the cruelty Bangladeshis faced in particular that eventually led to their sovereignty. Vivek Bald captures so much of the lost histories of South Asians in America that reframes how we understand both immigration and the role immigrants have played in shaping modern day America.”

Brave, Not Perfect by Reshma Saujani

“I still repeat things I learned from this book three years after reading it! It empowers you to look beyond your mistakes and think about growth as something agile and variable rather than linear. Pillars was created from a brave idea, and since its inception, we have encouraged our grantees, fellows, and peers to lean into their own brave and bold ideas to inspire and support others.”

Islamophobia and the Politics of Empire by Deepa Kumar

“Dr. Kumar so clearly lays out how ‘Islamophobia’ is so much more about racism than it is about religious intolerance or hate. Yes, hate crimes and hate speech are real and experienced, but the roots are so much deeper and tangled. Anyone involved in the work to advance social justice would benefit from Dr. Kumar’s explanations of anti-Muslim racism as not only included in the project of empire but essential to it.”

The Nine Lives of Pakistan by Declan Walsh

“This is actually the next book on my queue, after enough book-trusted friends of mine recommended it to me. It chronicles Declan Walsh’s ten-year journey throughout Pakistan distilled into nine essays, each highlighting a separate individual he encountered. On one hand, I’m intrigued to read an outsider’s perspective on the country, as sometimes I feel like an outsider myself, not having visited Pakistan in 18 years. On the other hand, I approach the book with reluctance, wary of any exoticism Declan’s perspective may inadvertently bring to these retellings.”

“Toni Morrison is a legend and a literary icon. While she can do no wrong, in my opinion, I especially recommend her Nobel Lecture in Literature, which can be found in this collection of her essays and speeches. Ms. Morrison won the Nobel prize for literature in 1993, and her speech at those awards was a love letter to language and the power it holds. It is here she pens her oft-quoted line: “We die. That may be the meaning of life. But we do language. That may be the measure of our lives.” Her approach to word-smithing is inspiring for the work we do every day at Pillars to explain the vision behind our actions.”

A People’s History of the United States by Howard Zinn

“Much like our work at Pillars Fund, A People’s History of the United States focuses on uplifting the voices and efforts of those who strive to make America better, but are often forgotten from common narratives of history.”

“Reel Bad Arabs was my first conscious introduction into how film and television reinforced, and sometimes created, the beliefs that society held about me as an Arab woman. Since then, I have deepened my knowledge on how all marginalized communities suffer the consequences of the dominant culture’s gaze through art. The heart of our work on the Pillars Culture Change team is to change these rules and create a world where we can write our own stories that tell the truth about our communities, whether we are Muslim, Black, Brown, disabled, LGBTQ, undocumented, or all of the above and, beautifully, much more. P.S. If movies are more your thing, this book has been adapted into a wonderful documentary by the same title I highly recommend. Streaming on Kanopy for free!”

Self-Knowledge by The School of Life

“The School of Life is known for its YouTube channel, where they help people understand themselves and those around them. Though tiny, this book is filled with multiple tools and questions to help us better understand our emotions when navigating complex situations. “

The Ungrateful Refugee by Dina Nayeri

“The Ungrateful Refugee put into context a contemporary experience for refugees of my generation entering Western society. While I always grew up proud of who I was with no desire to assimilate, I understood that was a privilege as a person that didn’t need to assimilate to survive. This nonfiction helped me understand the (at time unfair) decisions refugees have to face when reckoning with their identity and their sense of belonging to truly succeed in Western society. As a professional that focuses on people and culture, any book like this one that helps me increase empathy for others experiences not like my own are books I recommend!”

The Whiteness of Wealth by Dorothy A Brown

“The Whiteness of Wealth outlines how our current tax system privileges wealth patterns in historically white communities and penalizes wealth patterns in historically Black communities. Dorothy A Brown threads the book with her evolving understanding of finance—it isn’t the objective practice free of racism that she originally thought it was. As Pillars continues to grow our Catalyze Fund, The Whiteness of Wealth challenges us to rethink our systems and consider what gaps there may be between the communities we want to support and the communities who find ease in our processes.”

Women and Gender in Islam by Leila Ahmed

“Ahmed’s book was really formative for me— it gave me insight into how Islamic practice and traditions have evolved over time and how women were a part of that change. So much of our work in culture change is reframing our understanding of history and culture, and I believe this book does exactly that and informs my work at Pillars.”