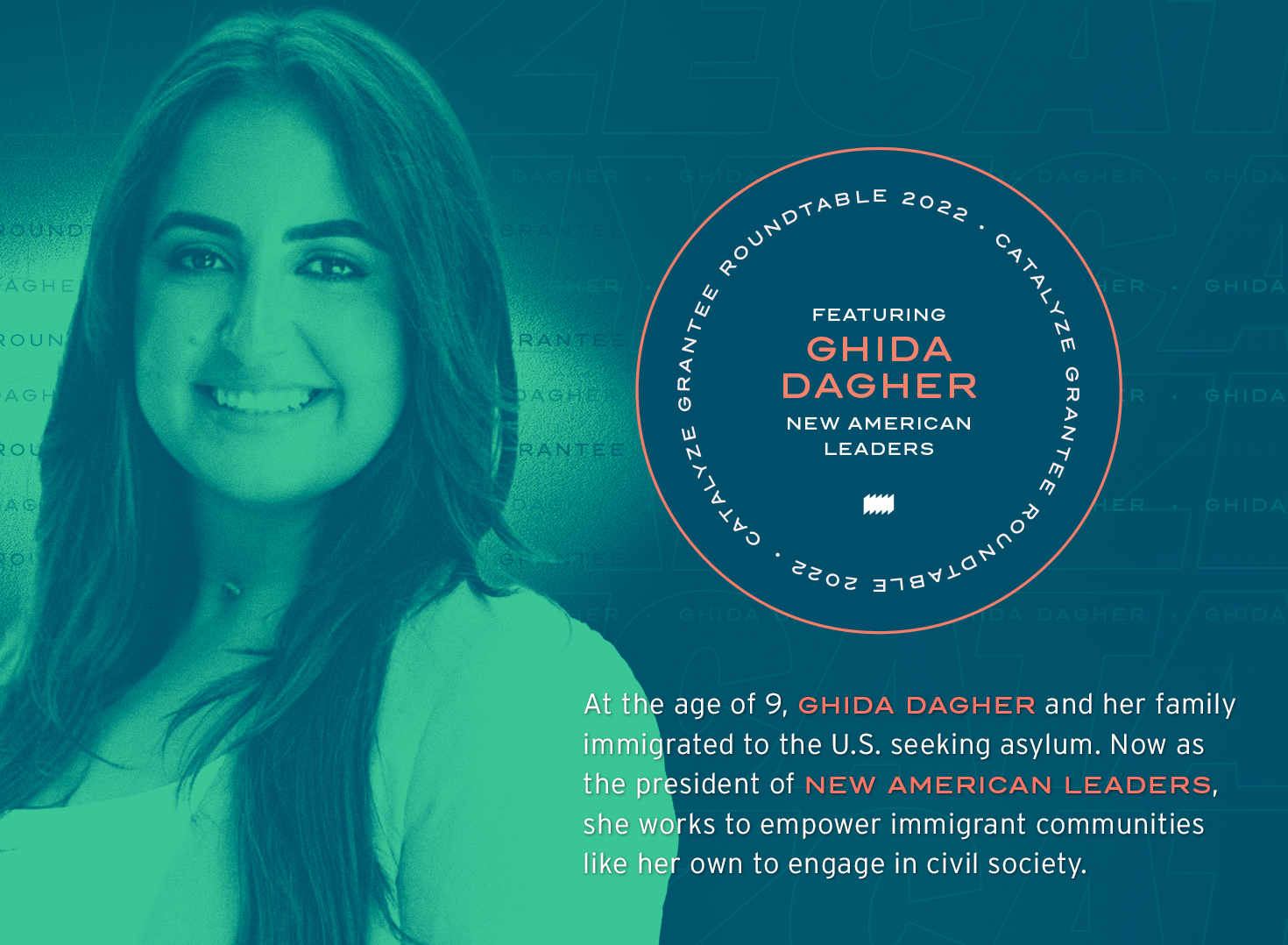 At the age of 9, Ghida Dagher and her family immigrated to the United States seeking asylum. Now as the president of New American Leaders, she works to empower immigrant communities like her own to engage in civil society. New American Leaders’ programs train first- and second-generation Americans to run, win, and lead in elected office all across the country. Ghida is a true believer that her immigrant background roots her and her American experience propels her, and she brings those convictions to her work.

Recently, we had the pleasure of bringing together three Pillars grantee-partners, including Ghida, at a roundtable to talk about their stories and the importance of their work. Ghida shared the secret sauce that powers New American Leaders’ work, why Muslim leaders in government are important catalysts for change, and the deep meaning she finds in community.

This is the third of three excerpts from our conversation with Pillars grantee-partners. What follows are responses from Ghida, edited for length and clarity.

Listen, the work is definitely challenging, and there are times when it feels like you’re getting nothing but discouraging news, unfortunately. It’s easy to get focused on that when you see headline after headline that continues to marginalize specific people. But there are wins. And that’s the beautiful thing about the work.

We’ve seen some key races around the country of Muslim Americans winning their elections and doing things in a way that is completely untraditional. It’s not what people usually expect electoral races to look like, to campaign, to knock on doors. There’s been this template that we’ve been told is successful in politics, but that template only works for certain types of people that look a certain type of way.

And so for us at New American Leaders, we are all about breaking that and saying, actually, what gets the work done is you being authentically yourself and showing up in the community that you come from and knocking the doors and having those conversations. And what we have proven in the last 12 years is that our way of doing campaigns actually works. And the way that we talk about ourselves is resonating with voters, regardless of whether they share an identity with us or not. So there’s been a lot of wins that are popping up around the country. It’s the message that resonates.

Somebody said to me, “Oh my God, new Americans are having a moment.” And the reality is, it’s not a moment. This is a movement, and it’s here to stay. And it’s only gonna get built more and more with time.

In a democracy, everyone’s voice should matter; but in reality, that’s not how the electoral system in the U.S. plays out. How does New American Leaders create more opportunities for marginalized communities to engage in civil society?

New American Leaders is the only national organization that’s dedicated to training new Americans—so immigrants, refugees, and those who identify with the immigrant experience—to run, win, and lead in our American democracy. So what does that mean? “Run” is our suite of programs that train leaders, community-centered leaders to be very specific, to know what it looks like to become a candidate and to manage campaigns. So it’s two tracks. It’s really big. But it is so critical for us that campaigns, not just candidates but also campaigns’ staff, are reflective of communities that they are seeking to represent. And then the “win” part of our work is getting people to understand what civic participation looks like, what it takes to actually build a voter base and to not just to engage in an existing base, but what it means to expand a base. Because often we’re not counted as part of a base because we’re not seen as traditional voters.

So when you put in the work a little bit differently, you’re redefining what voter looks like. So that’s the “win” side. And then the “lead” is once you’re elected in office, what does being a good public servant look like? We don’t have a lot of practice in being in these leadership positions because the system has always left us out of it. It’s created barriers for us to be in these positions, whether it’s party barriers and systems, whether it’s the fundraising and money in politics. So what it looks like for us is also engaging in leadership and in governance work. So that’s the run, win, and lead of the New American Leaders.

What does that actually look like when we’re talking about Muslim American leadership in our politics, in our democracy? We’re talking about people like Shahana Hanif, the first Muslim city council member in New York City ever. She was just elected the last election cycle. Shahana is one of 10 members of city council who are New American Leaders alum or affiliated with our networks. That’s 20% of city council. Shahana ran her campaign in an area that is Bangladeshi heavy, Bengali heavy in terms of language. There’s a lot of Bangala speakers, and none of them had ever seen a campaign that reflected or engaged them in that way. And Shahana did that and it made a huge difference. That’s what gave her the win at the end of the day.

It looks like City Council Member Pious Ali in Portland in Maine. It looks like Dearborn, that previously had [a mayor with] the motto of keep Dearborn clean—and we’re not talking about trash, we’re talking about people of a different skin color—now has its first Muslim and Arab mayor. It’s Aisha Wahab in California; it’s Varisha Khan in Washington; it’s Iman Jodeh in Colorado. It’s Rashida Tlaib and Ilhan Omar in Congress. That’s what it looks like to engage people.

And yes, they might be Muslim leaders, but what they bring to the table is their lived experience. And that is an experience that all of us can relate to as mothers, as neighbors, as leaders in the community, all of that is brought forward. And when you bring new Americans to leadership, it changes the entire dialogue of when an issue is discussed, what perspective is brought in, what the application of a proposed policy looks like.

I moved to the United States when I was 10 years old. I am Lebanese, but I’m also third generation Sierra Leonean. West Africa, Sierra Leone in particular, had several instances of civil war. And my parents were just fed up and wanted us to have a stable upbringing. And so they moved us here to Dearborn, neighboring Detroit.

I was super aware and conscious of my surroundings and what it was to be an immigrant in this country and what it was to be economically disadvantaged or not to know certain things. You learn that very quickly that certain people know things that you don’t because you’re not from that system. And they have an advantage right away. And so often growing up throughout my education years, it was how do I cut that window and make it smaller about the things that I don’t know, so that I can get ahead.

I actually thought I was gonna become a doctor because that’s a secure and stable career. And very quickly, first semester of college, I was like, yeah, this is not it for me. I care about the world around me, how it functions, and what I could do to really play a part in making people feel more comfortable wherever they’re at and feeling like they have an equal shot.

When you talk about Islam, you talk about justice, you talk about community. For me in particular, I reference the word community a lot and everybody defines that a little bit differently. But for me, it’s having each other’s backs. It’s doing something that puts our collective public good ahead of our individual. I think there’s an element of self-awareness when it comes to those values and that comes through our faith. It’s self-awareness of how we fit in the picture, how we can improve ourselves, how we are contributing or not contributing. And at the end of the day, we’re taught that all of us, whether we are from the same faith or not, we’re brothers and sisters in humanity, and that comes first.

I think that’s why a lot of the work has always resonated for me at New American Leaders. I’m an alum of our program. I did the program in 2015; it was actually then-State Representative Rashida [Tlaib] who pulled me into it and said, “You should do this.” Now, of course, the Congresswoman, one of two first Muslim Congresswomen.

I said, “Rashida, I’m not interested in this.” She’s like, “No, you’re gonna find community in this space. You need to do this.” And I did. And it was beautiful and it was wonderful. And I found my organizational home through New American Leaders. It was the first place that I stepped in and I was like, these are my people. This is my tribe. I left other opportunities to do this because I felt so strongly in continuing the organization and the work that it does and talking about all of it from our values at the end of the day.

I find my joy in two things. One is in my family. I adore spending time with my parents and my siblings and our loved ones. It’s just something about being in that love that brings me so much joy. And the other is I really enjoy watching people step into whatever space it is fully authentically as themselves and not feeling ashamed of, in particular, their immigrant background. Things like when people correct others on how to pronounce their name properly or making a joke that for some is ethnic specific and it might be perceived as an insider joke and not having any shame around that. It’s really embracing the culture, your culture, whatever it is, and bringing it to mainstream spaces that we talk about. To me that is really, really beautiful and brings me so much joy because for me, it invites me to be a part of it, even if it’s not mine. It just builds on that idea of brotherhood and sisterhood in our community.