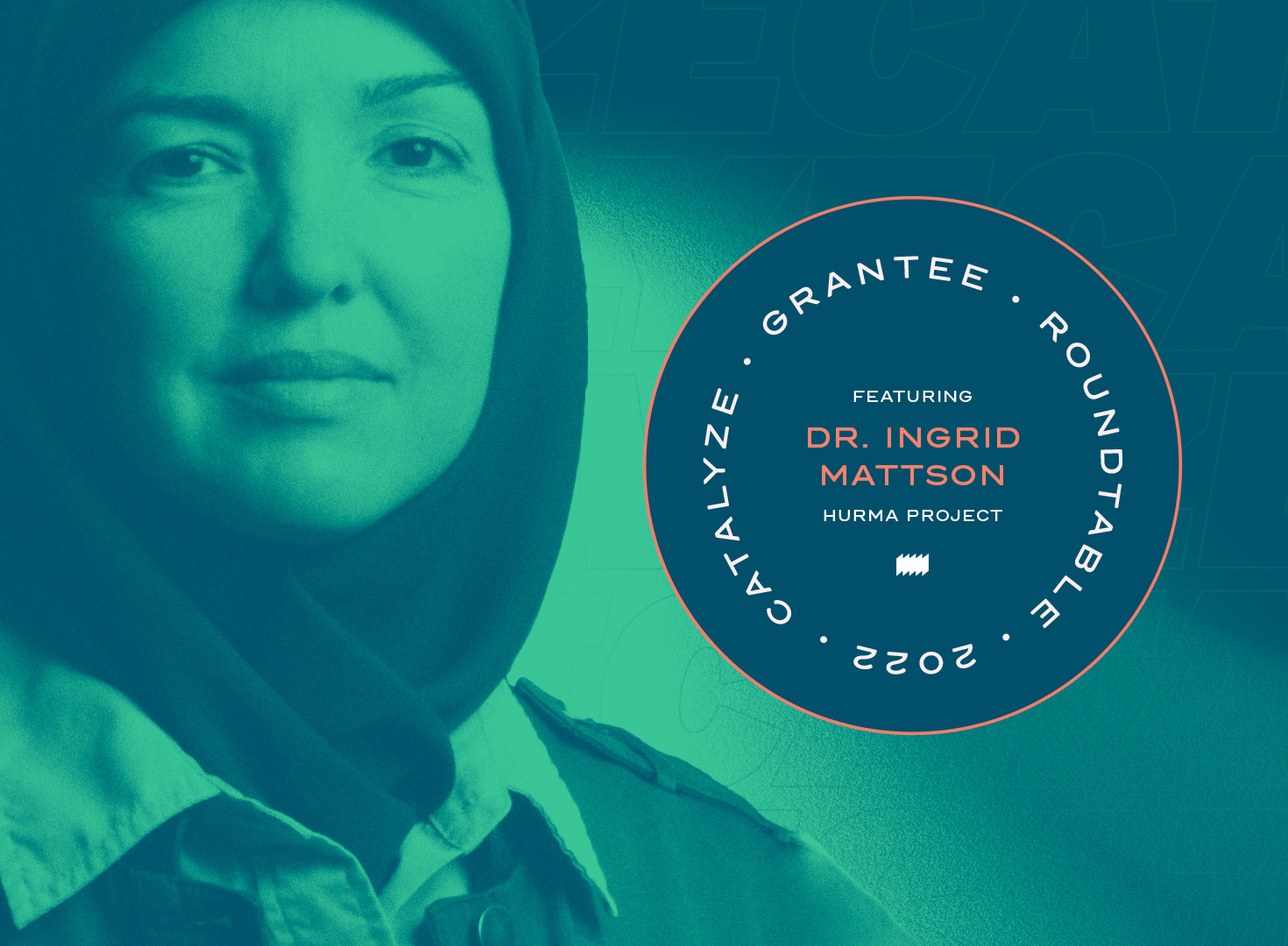 Dr. Ingrid Mattson, a professor of Islamic studies, is the founder and director of Pillars grantee-partner Hurma Project, where she illuminates the special responsibilities of those holding power and educates Muslim communities about their God-given dignity and rights. Hurma Project is committed to upholding the sacred inviolability of each person who is present in our sacred spaces and addresses predatory behavior, abuse of religious authority, neglect of duty to protect, and other related harmful behaviors in Muslim communities.

Recently, we had the pleasure of bringing together three Pillars grantee-partners, including Dr. Mattson, at a roundtable to talk about their stories and the importance of their work. Dr. Mattson imparted so much wisdom as she explored her journey to social justice work, the role spirituality plays in her approach to Hurma Project, and why she’s careful not to confuse failing to live up to a value with hypocrisy.

This is the first of three excerpts from our conversation with Pillars grantee-partners. What follows are responses from Dr. Mattson, edited for length and clarity.

Hurma means sacred inviolability. And what it speaks to is the sacredness of the human person.

What’s the most upsetting is not only when we don’t all react against the disrespect and the abuse of other humans and other Muslims, but when certain individuals have been socialized to the point where they themselves are wondering, do I even have any value?

So the times that I’ve been most happy, and when I feel that we have done something meaningful is when I get a message, just a very simple message from someone who says, “I listened to the last episode of the podcast” or “I was at your conference, I heard someone affiliated with the Hurma Project say this thing and it made me feel like I had value. It reminded me that I have worth. It reminded me that what happened to me and what people justified having done to me was wrong.”

It’s people who have survived abuse, gaslighting, and marginalization reclaiming their confidence in their own value. And to me, that’s the most important thing. If we can achieve that, then I’ll consider what we’re doing successful.

I would say that like so many others, spirituality is the thing that keeps me hopeful and is a reminder that this world is not in my hands. That I have a certain responsibility to try to understand how to change things for the better, to do that best I can, and to take it seriously. Not just to make a half-hearted attempt, but to make a serious attempt at understanding what’s happening, where the gaps are, and changing that. And at the same time, realizing I’m not in control of this world.

How has your work at Hurma Project informed your own spiritual growth?

​​At the Hurma Project, we’re looking at how people who hold some religious power, authority, knowledge, status, or position might use that power or authority or status in a way that is a violation of trust, that is abusive to others. And having spent almost five years trying to understand this, I realized it’s so much more complicated than I had initially thought. I think at the heart of it, we realize deep down that we really aren’t in control and we’re always looking for some way to have some control. And all too often, that is by controlling others.

And for me, it’s really been a very deep spiritual lesson because I’ve seen people who apparently seem to be on the right track really go off the rails. People who had a promising start in a position of leadership or authority end up in a place where they’re really taking advantage of other people. That’s very sobering.

And that goes back to the teaching of the Prophet Muhammad (PBUH), where he said “Help your brother, whether he’s being oppressed or is an oppressor.” And this is a very confusing statement when you look at the first part, but when the companions asked the Prophet, “how can we help our brother if he’s being an oppressor?” And the Prophet Muhammad (PBUH) said “stop him.” So when you stop someone from oppressing another, you are really helping him.

In a way, it’s not so much a choice, but it’s who we are. We’re shaped by our history, our family histories and journeys, and our circumstances. We have to be so grateful, first to God for bringing us along this path and to all of those people who influenced us.

I’m a professor of Islamic studies, and I know there are some other academics who just maybe have their heads buried in books. And there’s a lot of benefit in that. But to me, I can’t help but see that when I’m reading about these values and principles, and then I lift my head up and I’m like, wait, there’s a gap. We have these beautiful things, but why is there a gap in our behavior, my own behavior, my community’s behavior? And that’s the curiosity that really fuels me.

My dad was a criminal defense lawyer here in Canada. We had seven kids in our family, but we often had many more who were juvenile clients of my father or people who he had defended and been released from prison. And somehow they ended up on a family vacation or living with us for a few years. Whatever had happened to them, it was part of our responsibility to make sure that they were supported in continuing to to be able to realize their potential, whatever that might be. At least we could do our part with trying to provide some support. So I think that’s the way I saw the world. And I don’t think I can unsee that.

The Hurma Project hosts a podcast where you and your colleague Professor Mihad Fahmy interview imams, chaplains, therapists, and other experts about how to prevent and respond to violations of trust and spiritual abuse. Can you tell us about a conversation for the podcast that was particularly meaningful for you?

It’s been such an honor and privilege to have these extended conversations with chaplains and imams and teachers and social workers and others. I think, maybe because it’s one of the most recent, what comes to mind is a conversation we had with Imam Mohamed Magid, who’s the spiritual director and leader of the ADAMS Center in Virginia, and with Sister Magda Saleh, who’s a long-term educator in Muslim schools, a principal. And we were talking about children and about the treatment of children in our Muslim institutions, whether those are schools or youth camps or mosques.

What they were talking about was too commonly seeing some kind of belittlement of children. I mean, children are little people. But belittling them, like putting them down in their dignity or not allowing them to really express themselves, limiting them in their full potential. Sometimes under the excuse of respect for elders is a real silencing of children. You would never justify just belittling, insulting, shutting up an adult human, but somehow all of these things that are wrong when it comes to how we treat other adults, the adab that we think about, this etiquette, the manners that should happen between people, somehow there’s a human power trip.

It’s just so important because if we can’t get that right, how are we going to get other things right? I mean, we all say children are our future and the next generation and all of this. This is beautiful rhetoric, and we probably mean it.

Hypocrisy is a really strong term, and to me, hypocrisy has an element of intention in it. I’m saying this, but I really don’t believe it and I know I don’t believe it. So we like to say at the Hurma Project that what we’re trying to do is to close the gap between our Islamic values and our Muslim community practice.

There’s the communal reality of an American Muslim community that has been under attack, surveilled, misunderstood. So we’re in this reactive mode, we have this trauma. And to hear another criticism very often it just immediately triggers us. So we have to have compassion for that as well.

It’s not that there’s this good part of the community and bad part of the community. It’s that as human beings, we’re very complicated and there are a lot of factors that feature into why we react the way we do. Let’s really explore that together. And I have a lot of hope and faith that we can improve, God willing, little by little.

First—and anyone who might glance at my Twitter can see that I post far too many pictures of tomatoes, frogs, fish, birds, and other things—I just love being in nature. I spend a couple months a year with my family on an island where we don’t have running water. We live in the river and alongside the river and do a lot of living off the land. So I love being outside all the time.

And the second thing is, I don’t love traveling, but I love going to visit friends. And soaking up that beautiful opportunity to just be with someone who knows you, with whom you have a history, and, not really to do anything very exciting, but to be together. And I guess, especially after a couple years of the pandemic, just being each other’s physical presence, being able to hug them, sitting beside them on the couch, looking at them in their face. It just makes me so happy.