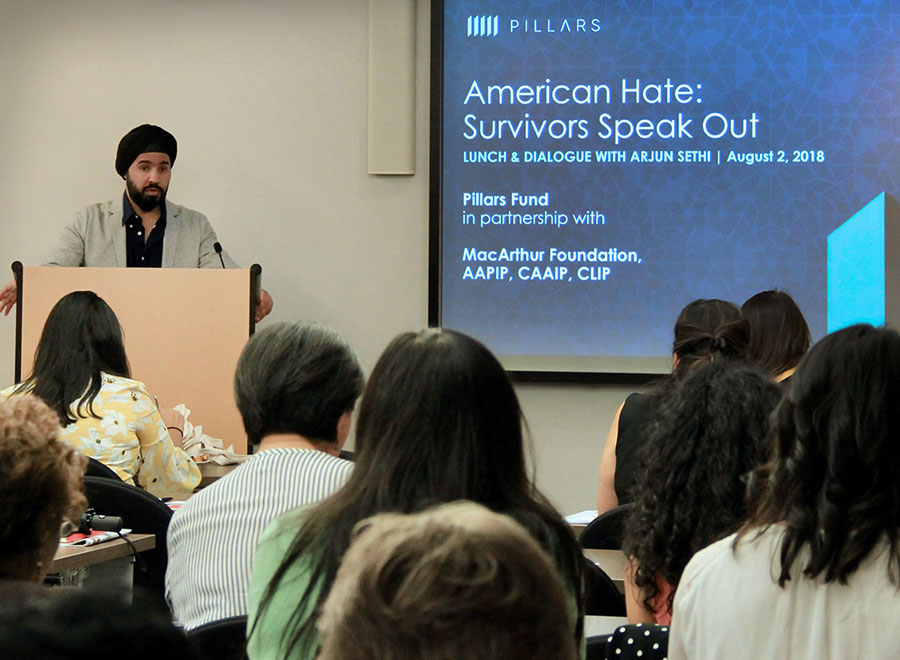 On August 12, 2016, after years of standing at the edge of his property and shouting at his neighbors, calling them “dirty Arabs,” “Mooslems,” and “dirty Lebanese,” Stanley Vernon Majors walks up to his neighbors’ front steps, then shoots, and kills Khalid Jabara.

On April 30, 2017, American University’s first black, female student government president is sworn in. The next morning, on her first full day in office, nooses and bananas are hanging around campus. Written across some of the bananas are the words “Harambe Bait,” referencing the gorilla killed in 2016 at the Cincinnati Zoo.

On May 25, 2018 on a Portland train a white man yells anti-Muslim hate speech towards two young black women, one of whom is wearing a headscarf. As three men try to subdue the harasser, he takes out a knife and kills two of the upstanders, wounding another.

These are just three of the many examples lawyer, activist, and author Arjun Sethi shares in his new book American Hate: Survivors Speak Out. Last month, the Pillars Fund, in collaboration with AAPIP Chicago (Asian Americans and Pacific Islanders in Philanthropy) held a dialogue with Sethi to discuss American Hate. The book is a collection of stories, those of 13 lives impacted by different forms of hate violence during and after the 2016 presidential election. They detail the horrifying actions inflicted and the psychological imprint left on survivors in the aftermath. The event was hosted by the MacArthur Foundation and co-sponsored by CAAIP (Chicago African Americans in Philanthropy) and CLIP (Chicago Latinos in Philanthropy).

When asked why he wanted to share these stories, Arjun Sethi responded, “It’s because we can argue about policy,” debating whether a policy is racist or not, “but we can’t argue about someone’s lived experience. It’s what happened. That’s the truth.”