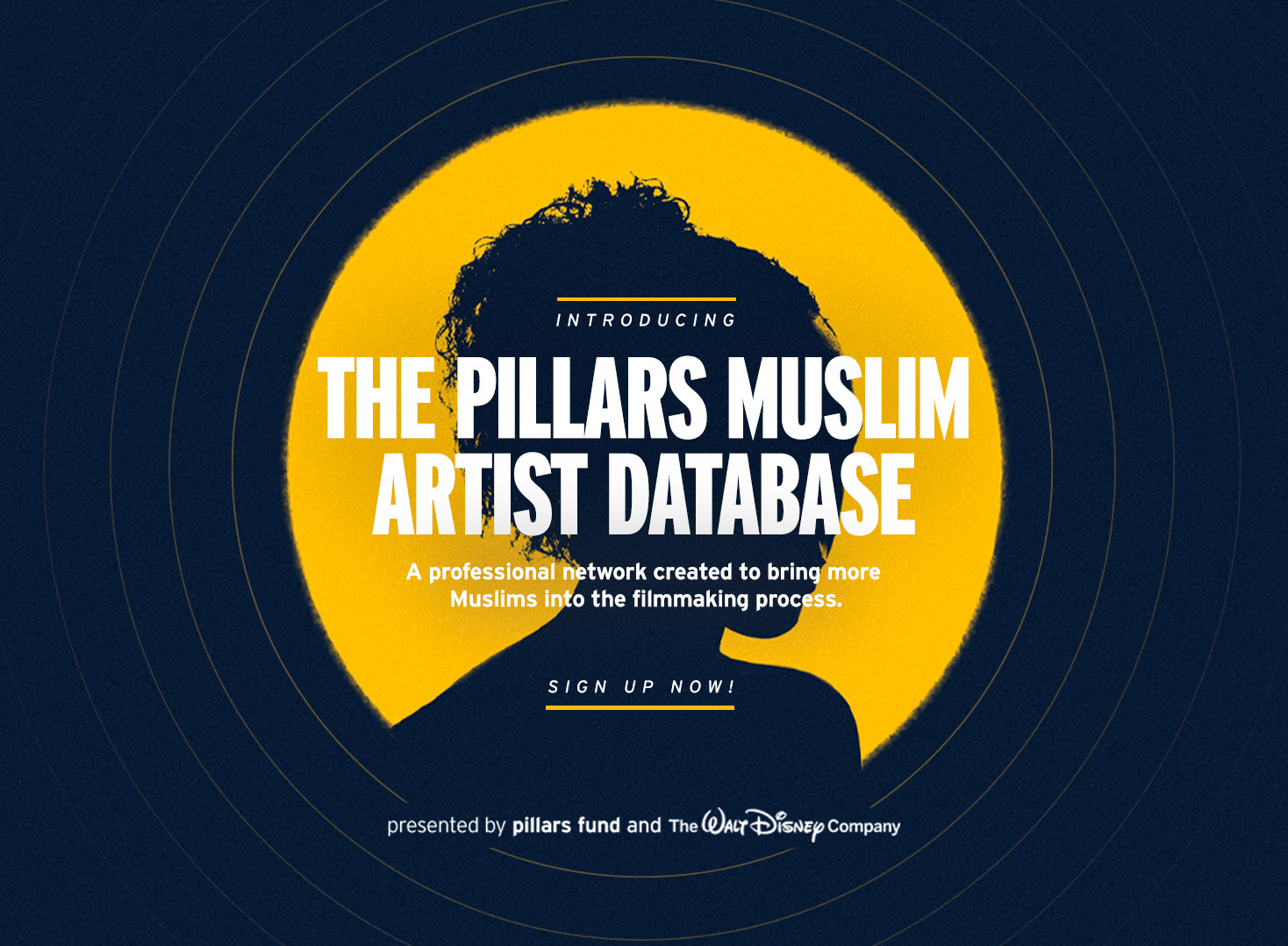 Today, Pillars Fund announces the launch of the Pillars Muslim Artist Database, a professional network created to bring more Muslims into the filmmaking process. The database was created in collaboration with and support from The Walt Disney Company.

The new database includes profiles for actors, directors, cinematographers, sound technicians, and other Muslim professionals working below and above the line in the filmmaking industry in the United States. The network is accessible to directors, producers, and casting directors who can search the profiles and invite artists to collaborate on their projects.

“Our communities have largely been missing from behind and in front of the camera for decades. Not only has this led to terrible misrepresentations of Muslims on screen, but there is an entire demographic of talented artists who have been underutilized,” says Kashif Shaikh, Pillars Fund Co-founder and President. “Pillars is incredibly grateful to Disney for partnering with us on this important and historic resource. We are making it easier than ever before to find Muslim professionals to work on a film or television project.”

A groundbreaking study from the USC Annenberg Inclusion Initiative released in June revealed the extent to which Muslim characters are missing on screen and are depicted with dangerous stereotypes. In response to these stark findings, Pillars Fund published The Blueprint for Muslim Inclusion, which encourages industry leaders to hire Muslim crew members so that talent behind the scenes can improve the quality of portrayals on screen. The Pillars Muslim Artist Database offers the entertainment industry an easy way to start making these connections.

“As part of our Reimagine Tomorrow endeavor to amplify underrepresented voices and untold stories, we are honored to support the new Pillars Muslim Artist Database,” said Latondra Newton, Senior Vice President and Chief Diversity Officer of The Walt Disney Company. “The database is an additional tool for our teams and creatives across the industry to use as they develop more inclusive stories.”

“There is an abundance and richness of talent in our communities, and I’m thrilled at the opportunity to invite the industry to learn from and work with us,” says Arij Mikati, Pillars Fund Managing Director of Culture Change. “Sourcing diverse talent is a crucial part of moving the film industry into a future that better reflects the demographics and experiences of our present.”

More details about the database can be found at artists.pillarsfund.org.

Pillars Fund amplifies the leadership, narratives, and talents of Muslims in the United States to advance opportunity and justice for all. Since our founding in 2010, Pillars has distributed more than $6 million in grants to Muslim organizations and leaders who advance social good. We invest in community-focused initiatives, push back against harmful narratives, uplift Muslim stories, and give collectively to generate resources within Muslim communities for social good. Learn more at pillarsfund.org

Kitchen Table Philanthropy in the Time of Ramadan

By Dilnaz Waraich This April, Muslims around the world are observing the holiday of Ramadan—a month-long period of fasting from dawn to sundown, and of thinking of others, and of giving back. Philanthropy is deeply rooted in the Muslim faith, as well as my own. When I was a child, the month before Ramadan, my […]

Today voters in Alabama, Arkansas, Georgia, and Texas are heading to the polls for primary and run-off elections, i… (link)